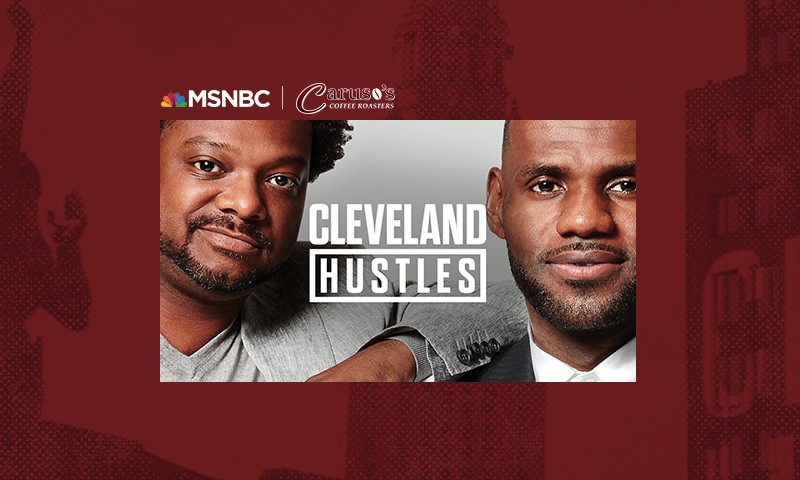 This summer’s smash hit CNBC reality show, Cleveland Hustles, produced by NBA superstar LeBron James and his longtime friend and business partner Maverick Carter, the Cleveland Bagel Co. (along with three other up and coming local entrepreneurs) get the chance of a lifetime to realize their own dreams while also helping to revitalize a neighborhood in Cleveland.

In episode 7 (originally airing on October 5th, 2016), Dominic Caruso of Caruso’s Coffee was featured along with the Cleveland Bagel Co. co-owners Geoff Hardman and Dan Herbst as they walked through the coffee roasting and tasting process to create a custom blend for their flagship brick and mortar store, in Cleveland’s own blossoming neighborhood “Linktown.”

The signature CBC coffee, to be known as the ’Blended for Bagels' brew*, and had to be a perfect pairing for the Cleveland company’s hybrid creations — described as being somewhere between traditional doughy New York-style bagels and the sweeter tasting Montreal versions. Since CBC bagels are available topped with sea salt, poppy seeds, sesame seeds (or “everything”), and with or without “schmear,” the perfect blend of coffee required more than just a little bit of trial and error.

You can stream the entire episode from CNBC online here. To fast-forward to the "good parts" (the clip with Dominic, Geoff and Dan -- shot on location at Caruso’s Coffee production facility in Brecksville, Ohio) go to 15:15.

While the Cleveland Bagel Co. brew is not available to the masses just yet, you can purchase and taste for yourself (at home!) many other blends crafted by Caruso’s Coffee roasters for other restaurateurs and business local to the #CLE, including 8 unique blends — 1 for each restaurant — by master chef Zack Bruell and the ever-popular Erie Island Coffee roasts, all open 24 hours a day at shop.carusoscoffee.com